How’s Your Back Seat?

Home/Devotion/How’s Your Back Seat?
Previous Next

How’s Your Back Seat?

My phone vibrated one afternoon this week.

“I’m in a pickle! My car broke down running errands…might you be able to come pick us up?”

My friend and two of her young children were about 20 minutes away, waiting in the hot South Texas sun next to a pile of car seats and bags.

Conveniently, they had broken down just a few blocks from a great coffee roaster and shop here in town. So after hugs, I recommended that we stop in for ice water and coffee before heading to her house.

My friend went in to grab coffee and I waited in our Expedition with the kids. Her middle child and I had a grand conversation while her mom was in the store:

“It’s messy back here,” she observed.

“Is it?” I rarely climb into the back seat.

“There’s a banana peel and trash and all kinds of books and toys.” Now, we tend to strew books all over the place, but the rest was definitely out of place.

“Wow. Sounds like we need to do some cleaning back there!”

After a pause, I heard the next question:

“Is your house messy too?”

Chuckling, I replied to her query: “Not really. We’ve been doing a lot of living in our car these last few weeks, though.”

Between you and me, I’m actually not a grand housekeeper. I’ve discovered that there is freedom in declaring that, and in this recognition: It’s my goal to be the best bad housekeeper I can be. We have developed a pretty good routine that keeps things in a generally-organized state of happy chaos. It takes a village, and I’m grateful that everyone in the house pitches in to keep things picked up.

That is the house, though, and the car obviously is a different matter. I keep the driver’s seat clean, and the front row slightly organized, but the back row? We had gotten out of the habit of taking everything into the house with us after every excursion. That was needing some serious tender loving care, as my 5-year-old friend had helpfully pointed out.

She still sat in the back seat, grappling with the state of affairs:

“What made it so messy back here? Do you have stuff out all over your house? What do you have in your house?”

I loved the clarifying questions. As I answered her queries about what kind of toys the kids enjoyed playing with, I appreciated her sideways attempt to find out if the rest of my life was in the same disheveled state as the seat she was currently perched in. Discipline begets discipline, you know, and if one area of my life is in disrepair it is likely that others are as well.

Sometimes you don’t realize it’s so bad until you look at it through someone else’s eyes. After we pulled into her driveway and everybody climbed out, I took a peek in the back of the vehicle: she was right. Discarded wrappers, color sheets that hadn’t made it into the house, shoes, water bottles, a swimming towel…it was indeed a mess back there. I took the next five minutes collecting trash and gathering misplaced items into a pile to sort into the house later.

Later that afternoon, the kids and I visited a car wash. We all grabbed a vacuum hose and went to work rediscovering what color the carpet actually was back there. We made time that afternoon for the kids who actually did ride in those seats to clean up their area and put items away. 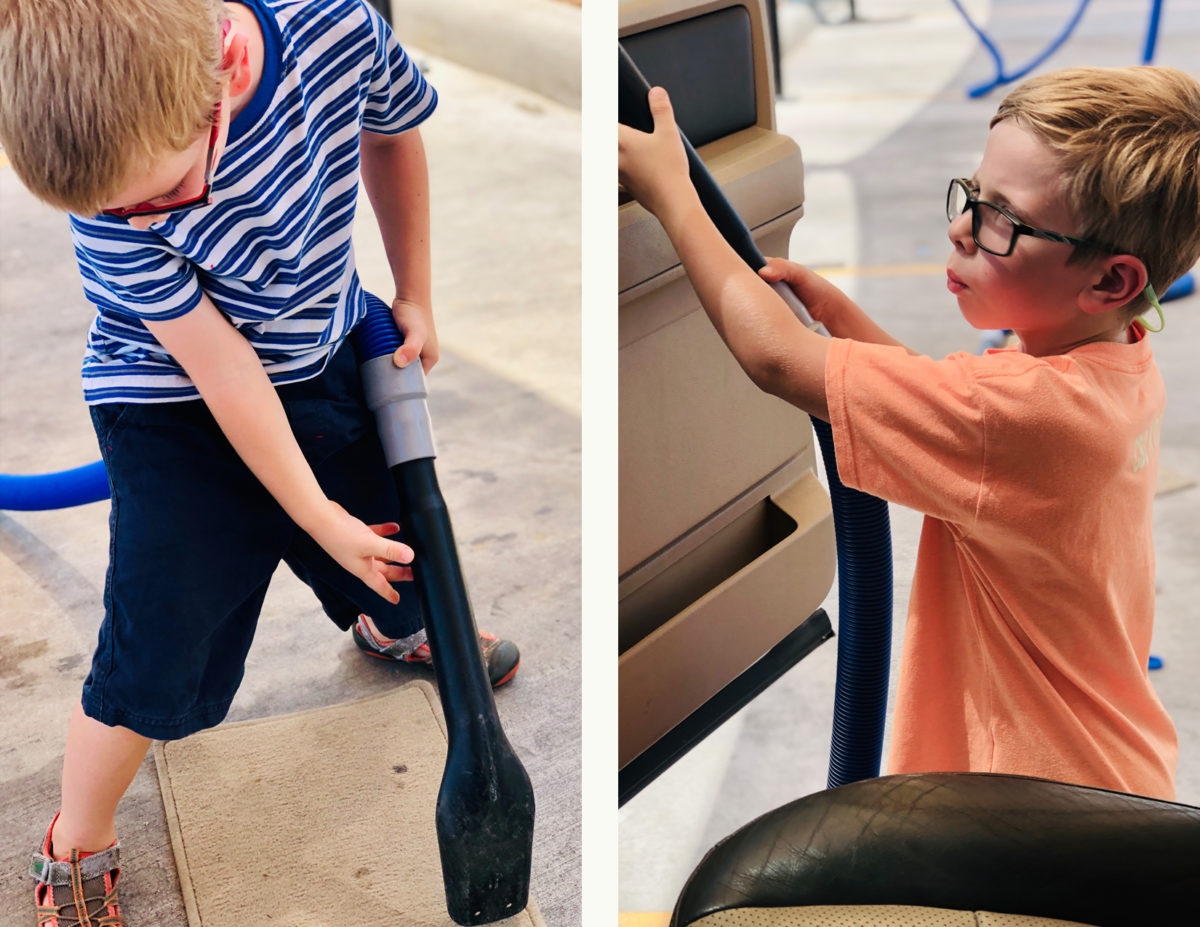 Thanks to my little friend, I was reminded of some truth this week: “Iron sharpens iron, and one man sharpens another.” (Proverbs 27:17)

We purchased a vehicle with three extra seats so we would have space for others. The very tool I used to serve others needed attention. I need to climb into the back seat every so often, and strive to see the world from the perspective of the people I live with.

Be open to the challenges of others. There is a beautiful security in letting people into your life who are free to lovingly point out areas you’re letting slide. I could have been defensive (we’ve been really busy lately, the house doesn’t look this bad, it was someone else’s fault), but that doesn’t change the state of affairs. It is easier to simply agree with the truth and work to clean it up.

Now the Expedition is cleaned out, vacuumed, and ready for use! So if you need picked up, just shoot me a text.

Sometimes we don’t need another chance to express how we feel or to ask someone to understand our situation. Sometimes we just need a firm kick in the pants. An unsmiling expectation that if we mean all these wonderful things we talk about and sing about, then let’s see something to prove it. —Dietrich Bonhoeffer