The Tractor: Known for Redemption

The Tractor: Known for Redemption

It’s a rite of passage that now, as a parent myself, I realize every parent anticipates: the day when your child takes over mowing the lawn. And though I had pushed a lawn mower through the yard countless times and been checked out on the driving lawn mower, I still remember the day I learned to drive the old red Farmall.

Monstrous wheels. Throaty whomp-whomp-whomp of the engine. Standard transmission—mostly a rusty old shifter that you would move from one gear to the next while mashing on the clutch.

It came with the house when I and my family moved to three acres in Bonham, Texas, just south of the Oklahoma border. Over the thrum of the motor, the previous owner shouted “Hey, hop on” and all the sudden I was a tractor driver. It became my job to mow “The Back 40” with a Farmall Super A. Really it was the back 2, but from my spot perched high on the metal seat, it was massive.

This piece of machinery had all the quirks of an old, well-used tractor. Mr. Porter showed me how to check for oil and fill it up with gas. “When checking for oil,” he drawled, “there are two screws here on the side. Grab your dad’s pliers and turn the top one. If oil dribbles out, you’re good. If it doesn’t, pour a quart in up here.”

He showed me how to turn the crank to start the engine, holding my thumbs over the top of the bar instead of wrapped around it. That way, if the engine backfired, it wouldn’t harm me: “People have had their thumbs broken,” his words echoed in my mind every time I turned the crank. The tractor had a battery, but it invariably never worked and you had to crank it by hand. This old guy got the job done.

Oil checked, gas filled, engine cranked, I had only to step on the belly mower, climb on top, press the clutch, and crunch into first gear. I was off!

Hours of my spring, summer, and fall were spent on that tractor. I would sing, think, wave at neighbors, and just plain zone out, feeling useful and proud.

I walked out past the garage one morning, ready to mow the back lawn. Gas levels were good. Grabbing a pair of pliers, I turned the screw for the obligatory oil check. The head of the screw twisted off, leaving the shank embedded in the ancient tank. Horrified, I stared at the rusty red screw head in the palm of my hand. What had I done?

Emotions and thoughts flooded my brain. I had just broken my dad’s tractor. How much was it worth? Could I even afford to replace it? They didn’t sell these parts at Wal-Mart. There was no way I could not tell anyone, fix it myself, and pretend it had never happened. What would my dad think of me? Had I done something wrong? I couldn’t believe it.

What should I do now? What could I do now? I tucked the metal piece into my pocket and headed out to mow the field. The whomp-whomp-whomp of the motor matched the thump-thump-thump of my heart as I battled the rightness of telling my dad and the fear embedded deep inside.

I was always the good little girl. Internally though, fear of failure and rejection defined me. Did someone love me for me, or did they only love me if I did what they wanted me to do?

Now, this tiny broken screw sat between my loving father and myself, separating me from the relationship that both of us craved.

Days stretched into weeks as the summer slowly went by. Every time I mowed the back field, I was sure the motor would burn up and the entire thing would come slowly to a smoky stop, all because of a broken screw. Dad would find out that I had hidden it from him, lying every time I replied with a “great!” to his query of how I was doing. What had been an enjoyable responsibility became a fear-filled drudgery, and my relationship with my dad withered.

The voice of condemnation went on and on in my head: If only he knew… he would be so disappointed. It’s been weeks since you broke his tractor; there’s no way you can tell him now. What if he finds out?

Externally, I was still the happy, obedient young teenager. But I was just faking it. It goes without saying that this affected my relationship with Jesus, too. If I couldn’t look my dad in the eye, how could I spend time with Jesus too?

The smallest thing—the head of a screw—had separated me from Jesus and my dad. Looking back, I get angry at what the enemy did that summer. Satan took a screw—a simple accident—and turned it into failure, fear, and condemnation. It became sin as I daily refused to respond to the Holy Spirit’s gentle and insistent prompting in my heart. I never said “No.” I never refused. I simply told myself each day, “I’ll do it tomorrow.” I gave into fear, condemnation, and lies. All because of a screw, and my response to hide an accident rather than run to my father who could fix it.

And so the summer crawled by in misery and self-condemnation. In addition to mowing lawns and faking spirituality, that summer ironically found me on several mission trips. In Florida, on a Thursday, the Holy Spirit spoke to me one more time, insistently reminding me that there was something I needed to make right. Rather than saying “I’ll do it tomorrow,” God gave the grace to pick up the phone, call my dad, and tell him my story.

Dad listened as I told him about his tractor and that silly screw. How I had been hiding it all summer, and how I was wondering if he would forgive me and tell me how I could make it right.

Of course, my dear dad forgave me. Of course, he spoke truth to my ears and my heart, telling me that a screw would never alter his love for me. “I’m not upset about the tractor, Mandy. I’m sad that something so small has been between us all summer long. I’m sad that this has been weighing on your heart this whole time.”

After receiving forgiveness and reconciliation from both God and my dad, I skipped down the hallway, back to the group of children waiting for me to tell them about a clear conscience and how God forgives.

Here’s the thing: God doesn’t view sin on a scale. Sin is sin, and it separates us from a relationship with Him through His Son Jesus Christ. He is faithful and just to forgive us our sins and to cleanse us from all unrighteousness (1 John 1:9).

Wouldn’t it be lovely if this was the only story about telling the truth that I had to tell? That after that moment on the phone, I was never tempted to tell a lie, or that I never battled fear of rejection again? In truth, this is one in a large bucket of tales at the ready to testify to the glorious gift of a clear conscience and the message of redemption. The reason I am so passionate about telling the truth now is that it has been such a deep struggle and sin for me, and is now such a place of freedom.

I told you that story so I could tell you this one.

Earlier this year, I had the opportunity to tell my tractor story to a group of first through fourth graders. I shared how God gave me freedom from fear and a renewed relationship with my dad. As I told my story, I set a plant in the middle of our circle and covered it with a blanket. When my short testimony was over, we talked about how plants grow in the light. When we hide sin and say “I’ll take care of that tomorrow,” our souls, like the plant, wither in the darkness. But if we walk in the light, as He is in the light, we have fellowship with each other, and the blood of Jesus cleanses us from all sin (1 John 1:6-7). Bring it into the light—that’s where we are meant to be.

At the end of the school year, a precious 7-year-old gave me a little thank you note. Tucked inside was a drawing of a tractor.

I now have that sketch on my desk, a beautiful reminder that God redeems. To me, it is proof yet again that my past can glorify God. A little first grader remembered the simple story of a clear conscience and forgiveness months later, and God’s Word did not return void. 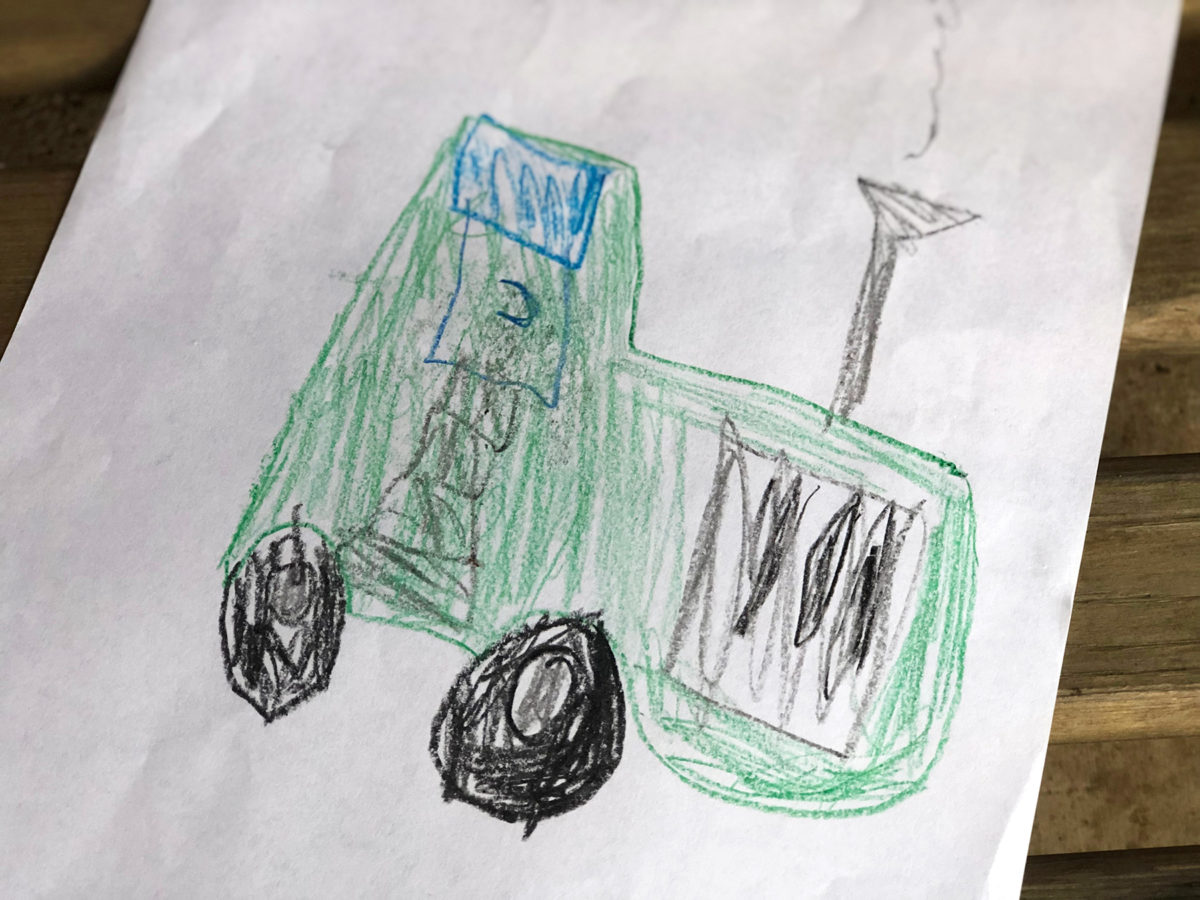 But instead, every time I share of God’s forgiveness and redemption, I am known as the girl Jesus loved. The girl He saw as worth pursuing, worth redeeming, worth loving. The girl who fought for a clear conscience, and now fights for truth.

We will be known by either our sin or by God’s redemption of our sin and of our lives. Two choices.

I write this because that person is me.

We will be known by either our sin or by God’s redemption of that sin in our lives. Be bold. Trust Jesus to forgive. Fight for a clear conscience before God and people. Tell your story. Be known for redemption.

What story in your past can you share this week, testifying to God’s redemption?

What story may God be writing right now? If you hear His still, small Voice encouraging you to make something right, bring that sin into the light—God redeems.

Resist [the devil], firm in your faith…The God of all grace, who has called you to his eternal glory in Christ, will himself restore, confirm, strengthen, and establish you. (1 Peter 5:9-10) 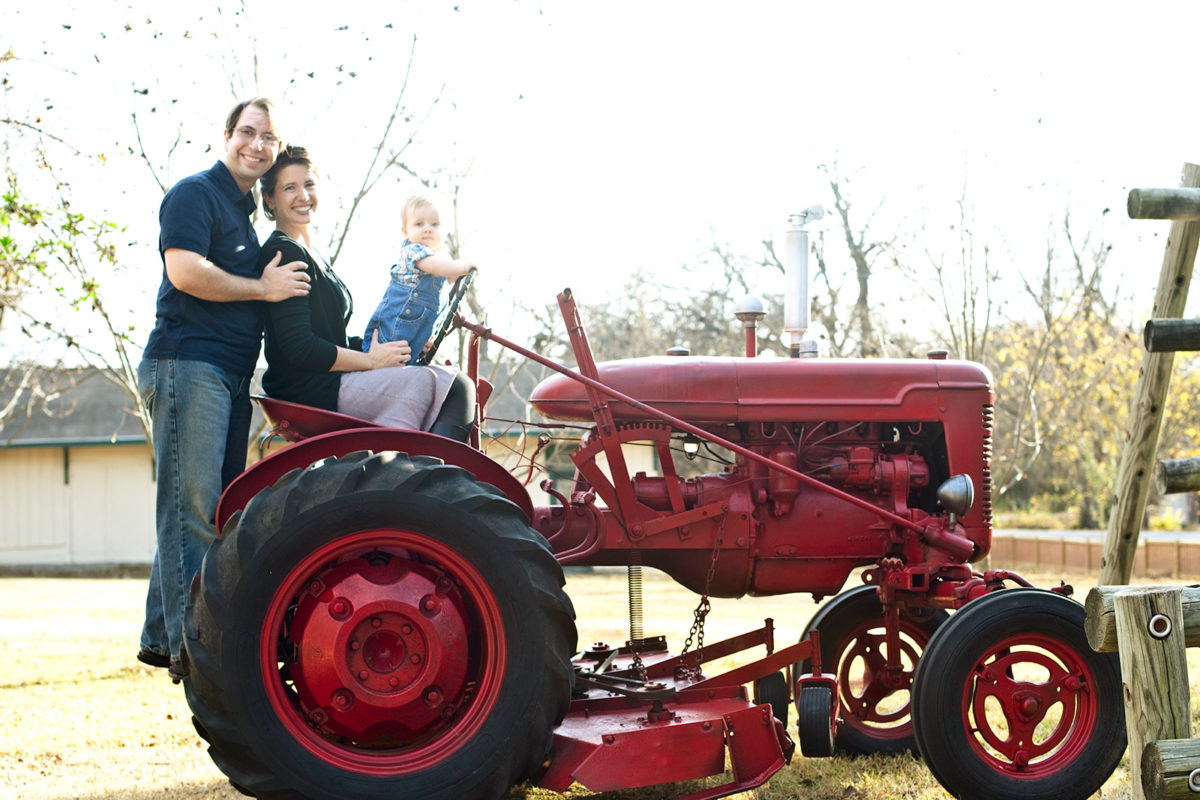 Years later, here I am with my little family and my then-infant son, grateful to look back on dad’s tractor with gratitude for all it taught me.